John 6: 1 After this, Jesus went away to the other side of the Sea of Galilee (that is, to Tiberias). 2 A large crowd kept following him because they had seen the signs that he was performing by healing the sick. 3 But Jesus went up on a hillside and sat down there with his disciples.

4 Now the Passover, the festival of the Jews, was near. 5 When Jesus looked up and saw that a large crowd was coming toward him, he asked Philip, “Where can we buy bread for these people to eat?” 6 Jesus said this to test him, because he himself knew what he was going to do.

7 Philip answered him, “Two hundred denarii worth of bread isn’t enough for each of them to have a little.”

8 One of his disciples, Andrew, who was Simon Peter’s brother, told him, 9 “There’s a little boy here who has five barley loaves and two small fish. But what are these among so many people?”

10 Jesus said, “Have the people sit down.” Now there was plenty of grass in that area, so they sat down, numbering about 5,000 men.

11 Then Jesus took the loaves, gave thanks, and distributed them to those who were seated. He also distributedc as much fish as they wanted. 12 When they were completely satisfied, Jesus told his disciples, “Collect the pieces that are left over so that nothing is wasted.” 13 So they collected and filled twelve baskets full of pieces of the five barley loaves left over by those who had eaten.

14 When the people saw the sign that he had done, they kept saying, “Truly this is the Prophet who was to come into the world!” (ISV)

This is a story worth telling. Around the World there are many that have known it, but there are just as many that don’t. Regardless, perhaps you can benefit from  this retelling. 😊

Jesus was moved with compassion at the sight of the thousands that followed from nearby villages. They were hungry for something that only He could provide. He preached, they listened. He did miracles, they marveled. In the gospel of Matthew (Ch 14) we are told that the day was passing fast, His disciples suggested dismissing the people so they could go buy something to eat.

Instead Jesus asked Philip where they might go to buy food for the 5000 men (plus women and children) and Philip’s answer is truly a man’s answer, he did instant math and gave a very practical answer. Simply put,”We can’t afford it.” Imagine tellin God, He can’t afford something! I am sure all you practical people out there would have said the same thing in your own words.

It says Jesus was testing Philip . . . He knew what Philip would say. I think He knew all of them would say the same thing. I also think he was having fun with Philip. After all, Philip like most men was a practical man and men like to solve problems.

Now think about it, 8000 people (my hypothetical figure including men, women and children) left their homes that morning. 8000 people were so intrigued and curious about what Jesus would do, that they lost track of time and place. Now, hungry and probably fatigued, they were a distance away from home, and it was getting late.

They were not wealthy, for barley was a poor man’s grain.

“Eat, eat, eat!” is a good rule to live buy. I am a mama just like her, I know this one, and my kids will attest to this. No one leaves home for a days journey without food and snacks packed for them to take along.

This boy was clearly willing to share as well . . . mama raised him well! He told Andrew. I wonder if Andrew chuckled as he relayed this to Jesus. 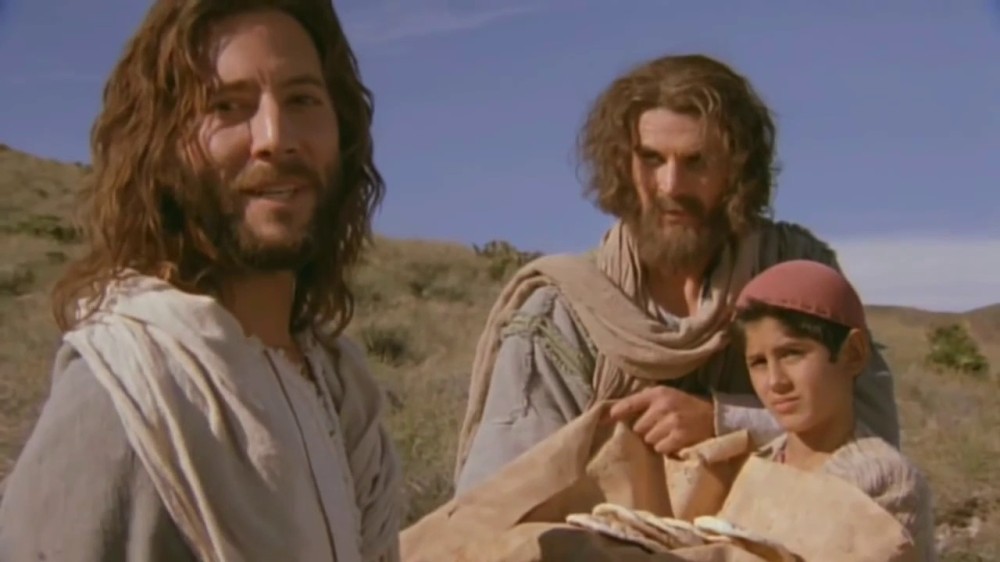 Now, Jesus had what He needed!

Could He have just made food out of nothing . . . sure, but then where would the blessing be for the boy? Surely you see that if Jesus intentionally healed and delivered those that came to Him, He intentionally used this boy’s lunch to bless him with twelve baskets full of food to take home to his wonderful mama. Remember they were not rich. Can you imagine the look on the face of the mama when she found out her 5 small loaves of barley and two fish fed a crowd of 8000 (or more)?! Imagine how she felt when she saw her boy return home accompanied by men carrying to her 12 baskets full of leftovers! 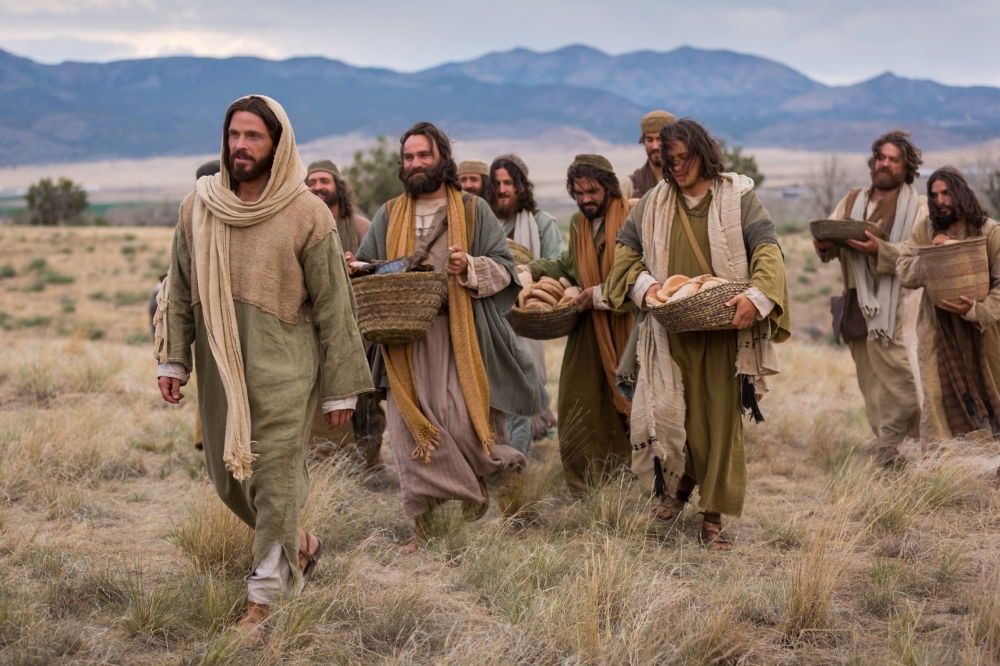 Back then, there was no way to store this food. No big fridge or freezer. So, what would she have done with all this food? Share it with the entire village for sure!

So, how much praise did Jesus raise for His Father in this one miracle? . . . 8000 (or more) plus a whole village! They ALL feasted on supernatural food blessed from Heaven that day.

I wonder if bread and fish were ever in short supply in that house after this blessing . . . 🤔

Now this is a great lesson for anyone, yet this is not my point for today. My title is “Spectator” Let me tell you why I call it that.

This miracle was just one of the many Jesus did in His three years of Ministry.

John 21: 25 There are many more things that Jesus did. If all of them were written down, I suppose that not even the world itself would have space for the books that would be written.(BSB)

Everyday, He was surrounded not just by humble, needy sheep who needed the Good Shepherd, but also those that sought to destroy Him. There were many that tried to trip Him up, to cause Him to fail in some way. They didn’t succeed.

There was also another group of people among them, that neither wanted anything, nor had any interest in following. They didn’t know enough of Scripture, so to argue with Him was not on their agenda either. Whether these were Jew or gentile was also unimportant, for they were present only for one purpose . . . to enjoy the show.

You might watch some sport today, Football, Soccer, Cricket, Basketball or any other. You may be a fan of one team or another, but you go to enjoy the show. You  don’t play on the team for either side, but you do cheer for one tean or another. When one wins, you shout with glee, but when the team you like loses, you whine and complain. Yet, then you move on, the show doesn’t change your life in any meaningful way for good or bad.

For you it is a “Spectator Sport” and you are a spectator. When it comes to sports, I am at best a very rare spectator, I prefer to spend my time elsewhere, but I do have kids and family that are avid spectators of various teams in many sports.

Many that were present in every crowd that gathered around Jesus were there merely as spectators. Their thoughts may have been like these:

“I wonder what miracle He will do today.”

“Did you see that? He raised a girl from the dead today.”

“Wow! A leper was healed, yet again!”

“That demonized boy who kept falling in the fire or water is now in his right mind. Amazing!

“Jesus tells amazing stories, He makes some very good points . . . but the Pharisees seem very angry with Him.”

“You know He puts them in their place, perhaps He should watch out . . . be careful, these are powerful people . . . He shouldn’t upset them.”

In the 8000 (or more) that were fed that day, I wonder how many believed? They ALL ate, they ALL saw the miracles He did, they ALL heard His message and saw His compassion . . . but how many went home changed forever? . . . I don’t know.

I do know many that watched Him over the course of His ministry, didn’t hate Him or oppose Him, they perhaps even had some respect for Him, but they were nothing more than spectators spectating a show.

You ask how I know that? Easy!

These same spectators who had eaten bread and fish blessed by the Master’s hand fled in fear, or disgust, when their Master was wounded not for His own wrongdoing, but for their sins. These same spectators who had seen many miracles showed up to mock, spit and curse this same Jesus who brought only Heaven’s Love to them. They forgot everything He said and did in their presence and joined the riotous crowd that would see Him tortured and crucified.

I wonder how many of them were guilty:

Matthew 27: 39 And those who passed by heaped abuse on Him, shaking their heads 40 and saying, “You who are going to destroy the temple and rebuild it in three days, save Yourself! If You are the Son of God, come down from the cross!”

41 In the same way, the chief priests, scribes, and elders mocked Him, saying, 42“He saved others, but He cannot save Himself. He is the King of Israel! Let Him come down now from the cross, and we will believe in Him. 43 He trusts in God. Let God deliver Him now if He wants Him. For He said, ‘I am the Son of God.’”(BSB)

They did not understand, but Jesus had admonished Peter earlier when in his zeal to defend Jesus; Peter attacked a soldier cutting off his ear: 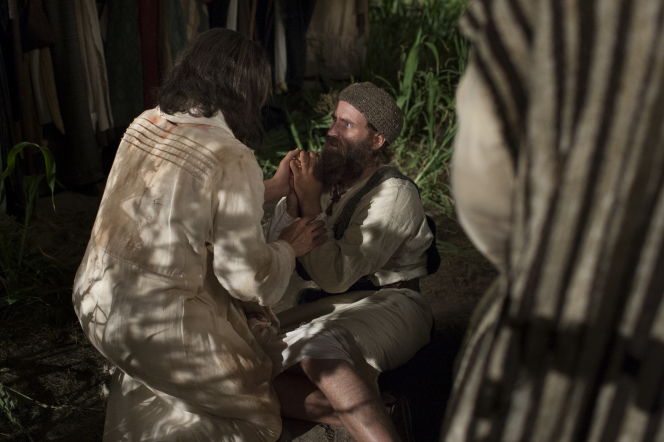 Matthew 26: 52“Put your sword back in its place,” Jesus said to him. “For all who draw the sword will die by the sword. 53Are you not aware that I can call on My Father, and He will at once put at My disposal more than twelve legions of angels? 54But how then would the Scriptures be fulfilled that say it must happen this way?”(BSB)

My friend, do you understand? He died exactly as He needed to in order for you and me to be forgiven. I don’t want to be a spectator only . . . I came, I saw, and was changed forever.

What about you? Are you a spectator only?