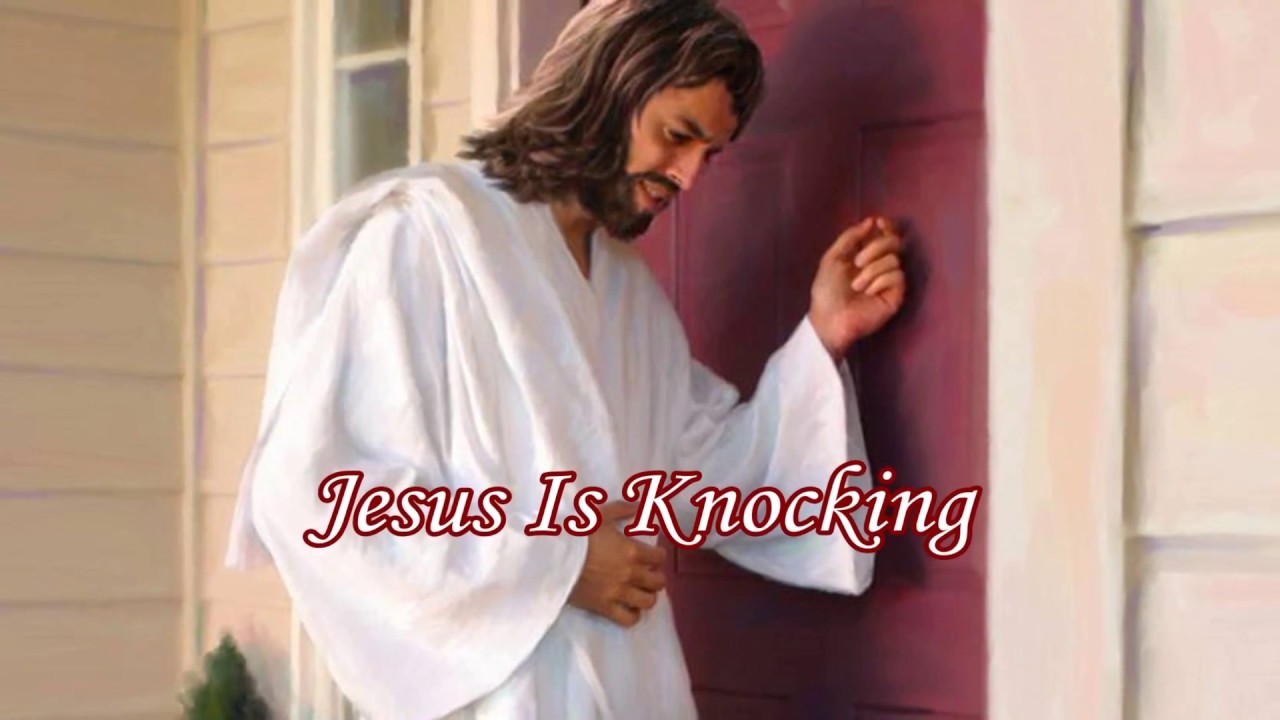 Revelation 3:20 See! I stand at the door and knock. If anyone hears my voice and opens the door, I will come in to him and eat with him, and he with me.(CSB)

1 How many people know about the promise of Jesus’ return?

2 How many people believe that He will return?

3 How many people as they read will reject the very concept as absurd, ridiculous, fairy tale nonsense and perhaps even scoff at the thought?

Since this is an open letter to the World, I suspect far too many do not know of His promise, far too few believe He will return and yes, far too many may reject the very idea.

To be honest, there was a time in my life when I would have thought the same. I am guilty of saying  “God isn’t coming knocking at my door!” This was before I knew that He actually did just that!! And . . . He actually said just that to all of us humans!!!

I said it in ignorance, now this Scripture is a life giving verse to me.

Once I understood and knew Him, I came to see that whatever He says He does . . . so, when I see that promise of His actual, physical, bodily return so clearly spoken of . . . I believe it!

Now lets continue with the Q&A between Jesus and His disciples:

1 When will these things happen?

3  What will be the sign of the end of the age?

When you are shown signs of approaching danger it behooves you to listen and act on the information provided.

Sunami warnings are to be heeded. We recently vacationed at a beach location that proved stranger than I had ever seen. In the middle of the afternoon at low tide the beach stretched out as far as the eye could see. The water receded so far it was hard to see in the bright sun, and people just walked about trying to find shells and hermit crabs etc. “This looks like a pre-sunami beach!” I gasped, for it immediately reminded me of the Indonesian Sunami in 2004 which killed more than 225,000 people in one swipe across a dozen nations.

A family sitting near heard me say that and they reassured us this was everyday low tide at this location. So, we stayed and walked the beach. But, you should know that generally speaking when the water disappears at a rapid pace and the beach seems to extend a great distance, in places where it isn’t the norm, beware, run to higher ground as fast as you can. Don’t look back, don’t return for your beach towel, just run! Run for your life!

After the Indonesian tsunami, every nation worked on getting electronic sirens in place, hopefully they work next time.

To ignore the warning would be like these people burying their heads in the sand.

The wave will still come!

In the previous post I wrote about Luke’s account being different in some ways and about how Jesus foretold what would happen to Jerusalem, and how it was fulfilled in 70 AD. This was a clear warning to the disciples for their safety and was meant to be shared with others that would listen.

Luke 21: 20 “When you see Jerusalem surrounded by armies, then recognize that its desolation has come near. 21Then those in Judea must flee to the mountains. Those inside the city must leave it, and those who are in the country must not enter it, 22 because these are days of vengeance to fulfill all the things that are written. 23 Woe to pregnant women and nursing mothers in those days, for there will be great distress in the land and wrath against this people. 24 They will be killed by the sword and be led captive into all the nations, and Jerusalem will be trampled by the Gentiles until the times of the Gentiles are fulfilled.(CSB)

The day Jesus entered Jerusalem on a donkey (Palm Sunday) He wept over Jerusalem saying:

Luke 19: 41 As he approached and saw the city, he wept for it, 42 saying, “If you knew this day what would bring peace — but now it is hidden from your eyes.  43 For the days will come on you when your enemies will build a barricade around you, surround you, and hem you in on every side. 44 They will crush you and your children among you to the ground, and they will not leave one stone on another in your midst, because you did not recognize the time when God visited you.”(CSB)

Jesus knew beforehand that the bulk of the population would reject the warnings and as a result would perish. Yet it was not His desire that any should perish. So, when Jesus told the disciples of the impending doom they listened and shared with others. In 68 AD the Romans lay siege to Jerusalem for 18 months.

Those that heeded the warning got out before. It was after all more than three decades before the siege that the first warning was given by Jesus! Acts 4:32-36 gives the account of how believers sold their properties and gave the money for Kingdom work. I think they felt that property in Jerusalem would be of no use anyway, since war had been prophesied. For a little while people could still go in or out of the city but then it ended. Jesus’s instructions were clear, they knew they were to flee. The people that didn’t listen, chose to stay in the city where they ran out of food and water and eventually starving from hunger some even resorted to cannibalism. 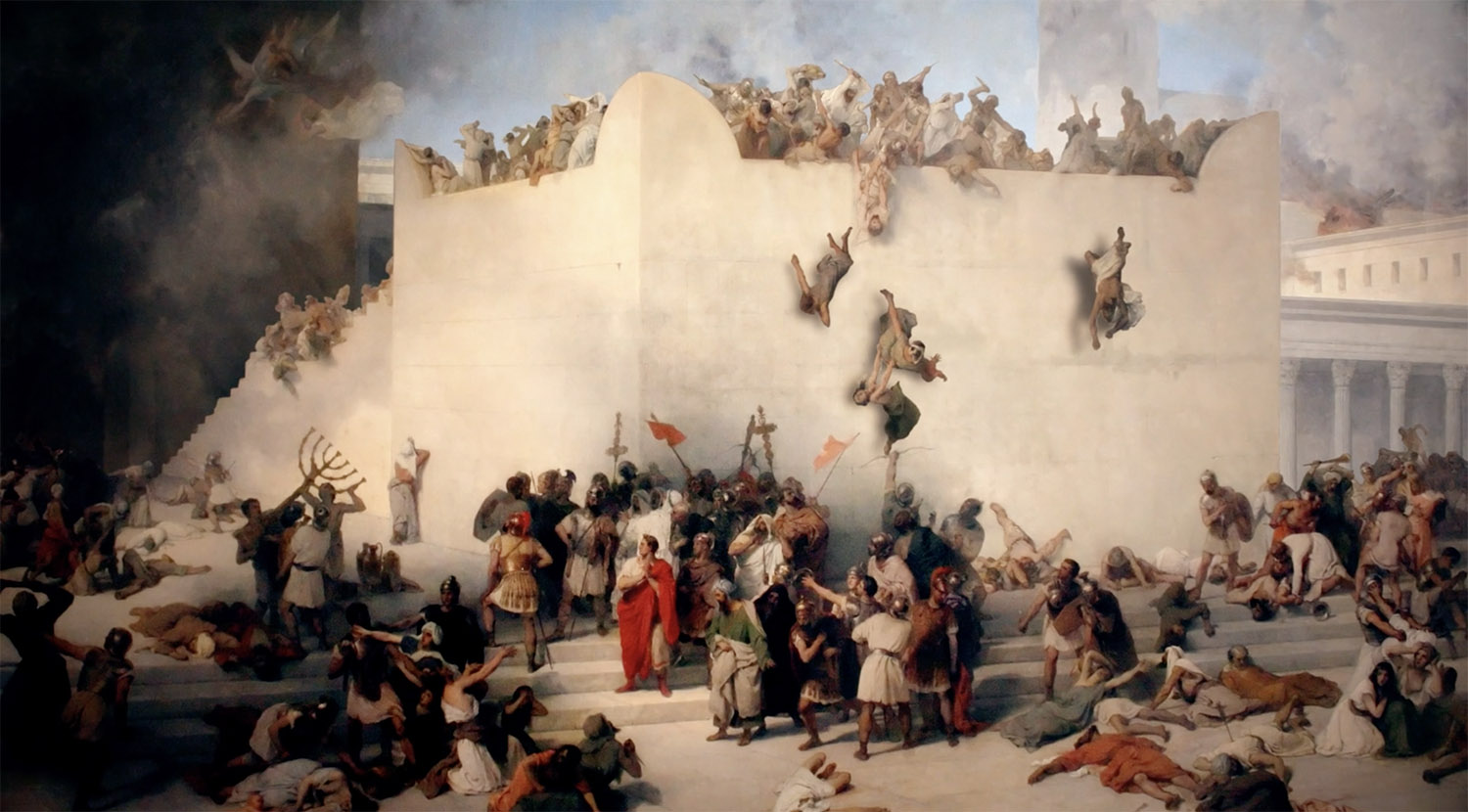 Finally, the Romans attacked. They ransacked, looted, pillaged and killed young and old. Men, women and children were butchered indiscriminately. By the time all was done the beautiful city was a ruinous heap, destroyed and burnt; the Temple, that glorious Temple was burnt down completely. TheTemple walls were coated with gold on the inside. The gold melted into the crevices of the stone walls. Soldiers were out to loot, they actually took apart the walls leaving no stone upon another in search of the gold that had melted.

Everything Jesus said was proven true.

More than a million people died in this seige and eventual conquest. 100,000 were taken captive. Israel was no more. Whatever was left of the Jews scattered abroad far and wide. For almost two thousand years more there was no nation of Israel, and no national identity.

Here is ONE FACT you should note: According to the writing of Josephus the historian, NOT ONE Christian perished. The disciples warned, those that listened and believed, got the message and got out while they still could.  The others who did not believe chose to stay and lost everything including their lives.

The message is clear: pay attention when God speaks, listen or else suffer the consequences! They certainly did!

Note: Jesus said that Jerusalem will be trampled until the times of the Gentiles are fulfilled . . . we will come back to that . . .

Now on to the second question:

Jesus gave several signs that were meant to serve as warnings. He said it would be as a woman in labor (vs8). Using the birthpangs analogy understand the contractions start out far apart but grow in intensity and become more frequent as the birthing process continues. So Jesus said as His return gets closer, things will get worse and periods of relief will become shorter eventually disappearing completely. Here is the account in Matthew –

Matthew 24: 4 And Jesus answered and said to them, “See to it that no one misleads you. 5 For many will come in My name, saying, ‘I am the Christ,’ and they will mislead many people. 6 And you will be hearing of wars and rumors of wars. See that you are not alarmed, for those things must take place, but that is not yet the end. 7 For nation will rise against nation, and kingdom against kingdom, and there will be famines and earthquakes in various places. 8 But all these things are merely the beginning of birth pains.(NASB)

In the above Scripture these are named as signs:

Wars and rumors of wars.

Yet all of these are only just the beginning. It is not yet the end! Ask any woman who has birthed a child and you will find that the very first contraction makes her double over in pain. Yet as the hours progress, she will admit that the beginning was very mild compared to the latter part of labor.

Now to give you another bit of information: Prophecy can have more than one fulfillment. As I have said before, to all prophecy there can be an immediate or near term fulfillment, and then again a longterm fulfillment. Example is right in Luke, The prophecy of the destruction of Jerusalem was fulfilled, but it also fits in with the sceneario in Matthew and Mark.

Luke 21:10 For nation shall arise against nation and Kingdom against Kingdom. 11Great earthquakes shall be in various places, and there shall be famines and plagues and panics and terror, and great signs from the sky shall appear and there shall be great storms.(ARA)

Notice the great storms? This is from The Aramaic version. The Hebraic version I have says “there will be much foul weather.” Luke also adds that there will be plagues which are pandemics of today. Panics and terror (fear) are so commonplace. I can vouch as a counselor who has dealt with her share of clients experiencing fear and panic. A sense of dread pervades everywhere just due to Covid today. People that do not know God certainly feel fear and dread stepping out of the house.

I researched a decade ago for my class and found there was a major uptick in all of these signs that Jesus gave after 1948 when Israel became an independent nation after 2500 yrs and the prophetic clock started ticking again. I also found that the increase in all storms, volcanoes, earthquakes became astronomical at the turn of this century.

In the coming posts we will examine each sign from today’s lens.

Knowing God and His promises I have no fear of the future, I know He is my sure salvation and I can rest in His love and protection completely. If you stay with me there are many more things you will learn, many things you may not have heard of, but all to give you hope for the future even as things get worse.

For now, let me ask this my friend, are you like I was decades ago, thinking God was not knocking at my (heart’s) door? If you are, trust me, He is knocking at your door as well. His promise holds true today just as before. Will you open your heart to Him? Your eternity hangs in balance.

This way you get my new posts in your email  directly without being dependent on fickle social media.