The Color of Life

Isaiah 45: 11 Thus says the LORD, the Holy One of Israel, and its Maker:“How dare you question Me about My sons, or instruct Me in the work of My hands? (BSB)

Psalm 139: 13 For You formed my inmost being; You knit me together in my mother’s womb. 14 I praise You, for I am fearfully and wonderfully made.(BSB)

When Maker created the Heavens and the Earth as we know it,  it took Him six days. On the seventh day, He rested .

Maker was done making the birds that fly in the skies, and  the fish and all the sea creatures that filled the seas on day Five.

A lot happened on day Six. In Genesis 1 He tells what he made. First He made the animals:

Genesis 2 tells how He made them. It was mass production as it had been for the birds and the sea creatures.

Genesis 2: 19 Out of the ground the Lord God formed every beast of the field and every bird of the air, and brought them to Adam to see what he would call them.(NKJV)

On the same day, after making the animals, Maker was ready to make His masterpiece . . . the human. Adam, the first Man was to be made in the image of the Maker. Maker wanted a reflection of Himself in this, His creation. A mirror reflection that would govern responsibly, and protect (keep) all that He had created in the previous days in the way that He Himself would.

Genesis 1: 26 And God said, Let us make man in our image, after our likeness: and let them have dominion over the fish of the sea, and over the fowl of the air, and over the cattle, and over all the earth, and over every creeping thing that creepeth upon the earth. 27 So God created man in his own image, in the image of God created he him; male and female created he them. (KJV)

Once again, Genesis 2 tells us how He made them:

Genesis 2: 7 And the Lord God formed man of the dust of the ground, and breathed into his nostrils the breath of life; and man became a living being.(NKJV)

A little bit later on the same day, Maker effectively did the first surgery in human history. He caused a deep sleep to come upon Adam and opened up his side to take Eve out.

I do not know what color the skin of Adam was. Nor can I tell you what color Eve was.

The above is simply a representation I found on line . . . You can color it black, brown, yellow, red  . . . any color of dirt you can find. Truth is, no matter what you guess or want Adam and Eve’s color to be, you would be guessing.

What I do know, is that when Maker made Adam, Adam contained Eve in Him for she was taken out of Him, AND he and she contained were made out of DIRT! Dirt is what He used to make the animals that teemed on Land and the same was used to make His masterpiece, the Human.

Lately “the color of dirt has become a bigger issue than I have ever known it to be in my lifetime. I grew up in India and even when I was growing up “fair skin was appreciated more than the darker skin tones, even in India where we had a whole plethora of colors all around. Just in my family clan, we had many variations. In my nuclear family, my daddy was a lot darker than my mother, and my sister is a bit darker than I am. While we noted the difference, (how could you not?!), we didn’t place less value on the person. My daddy would have been worth much less if we did! many other relatives likewise would have been valued a lot less if everything was gauged by the color of dirt they were made with.

Psalm 139 quoted above makes it clear that Maker makes every baby in the womb cell by cell. He knits the baby with all love in the mother’s womb. I am a knitter, and work with yarn to create different things so I appreciate the analogy of knitting. Thing is, He decides the color of Dirt He makes each baby with. You may argue DNA, but He made the DNA. The DNA itself looked like yarn to me.

ALL the colors, the variations and shades of  skin color in his and her DNA that were yet to appear down the road in all generations and locations. He and she also contained ALL the variations in the features such as nose shape, mouth shape and eye shape and color in their DNA.

Maker decided to place that treasury of variations in His Masterpiece when He created Life on Earth. Maker decided this is the way He wanted to do it for in this His creation He found pleasure. Since He did this Himself, I have no trouble seeing that His pleasure was in ALL He placed in Adam and Eve . . . meaning ALL colors, variations, sizes, genders, shapes of human beings were EQUALLY pleasing and important to Him.

I have a large Map i purchased a few years ago. This map is actually a World History map. Here is a picture of it. 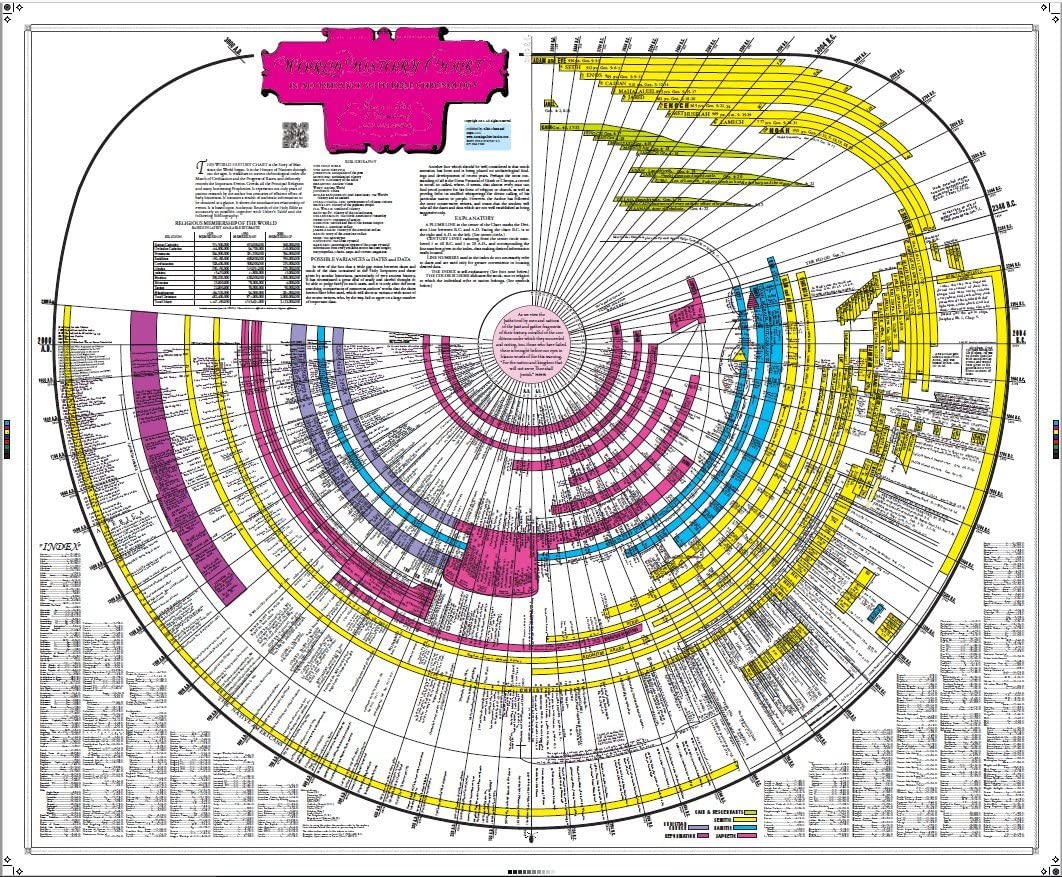 I wish I could enlarge it so you can read it all, but sadly the only way to see all details is to buy it. It is called the Amazing Bible Timeline with World History, and you can buy it on Amazon.It is great to use for class study as well.

This map details History starting from the birth of Adam, to the year 2012.

It details with color coding the map from the time of Noah to his sons dispersing after the Tower of Babel and going around the World ultimately populating the Earth. The three sons probably started out the same color and features as their parents, but as they spread out to different continents, and climates, nature took it’s course and as we know today they came to  look very different from each other over time.

Human DNA still relates them though time, climate and generations along with language have separated them. Skin colors have changed over time, but they still are as varied as the color of earth found somewhere on the planet. No one has become the Blue of the sky, or the red of a rose, the grey of a storm, or purple of a lilac. No . . . they have all stayed the color of dirt, simple dirt we plant in, play with, build with, mold pottery with, just dirt. Some are dark, some are light, some all shades and variations of dirt, because their one common anscestors Adam and Eve were made from the dirt on this planet.

What made Adam and Eve have more value than the animals who were also made from dirt was that the animals were “mass produced ” to start the reproduction cycle, whereas Man was created “unique” by Maker’s own hand to be a mirror image of Himself, and that Maker blew His own Breath into this masterpiece to give it life. What gave this chunk  of dirt meaning and life was Maker’s Breath, the Holy Spirit. What ascribed value to it was the Maker Himself made him individually. It had no intrinsic value that was special, it took Maker to make it and breathe into it to give it life. The fact that He breathed into Adam His own personal breath is what made this chunk come alive and be destined for eternal life. . . . that is until, Adam and his mate Eve rebelled and gave up on eternal life. Had they not done so, the Son of God, Maker Himself would not have had to go to the Cross.

So, for those of you that consider the modern trend of color being and issue that divides us, consider this:

You are what Maker makes you to be!

Job 33: 4 The Spirit of God has made me, and the breath of the Almighty gives me life. 5 Refute me if you can; prepare your case and confront me.  6 I am just like you before God; I was also formed from clay.(BSB)

To make an issue of color is to take issue with our Maker Himself, for neither you nor I choose the color, we have no say in the matter at all. One asking the other to apologize for the color they are created to be, or one treating the other less due to the color Maker used in making that person is tantamount to insulting the Maker whose choice it remains!

Maker Himself spoke this:

Isaiah 45: 9 Woe to him who quarrels with his Maker— one clay pot among many. Does the clay ask the potter, ‘What are you making?’ Does your work say, ‘He has no hands’?

11 Thus says the LORD, the Holy One of Israel, and its Maker:“How dare you question Me about My sons, or instruct Me in the work of My hands? (BSB)

Right in the beginning in the Book of Genesis we read that God created the first Man and Woman as His masterpiece and to be a mirror image of Himself. It is worth repeating:

Genesis 1: 26 And God said, Let us make man in our image, after our likeness: and let them have dominion over the fish of the sea, and over the fowl of the air, and over the cattle, and over all the earth, and over every creeping thing that creepeth upon the earth. 27 So God created man in his own image, in the image of God created he him; male and female created he them. (KJV)

Jews from the world around come in all colors, features and shapes:

Just for fun, I also chose to find some pictures of different colors of dirt available on earth:

Now some may say, but Maker took the dirt in Bible lands, so only that must be considered. . .

Okay, we will go with that argument for a moment:

Here are some pictures of dirt availble in Israel:

Do you catch the point? Maker took dirt, He picked the color, neither you nor I have a choice in the color He made you or me to be. We can celebrate Him and His choice. I suggest we celebrate what and who He made you and I to be and celebrate His goodness seeing the beauty He created.

Look in the mirror, you are lovely as He made you . . . and so is everyone else!

Genesis 1: 31Then God saw everything that He had made, and indeed it was very good. So the evening and the morning were the sixth day.(NKJV)